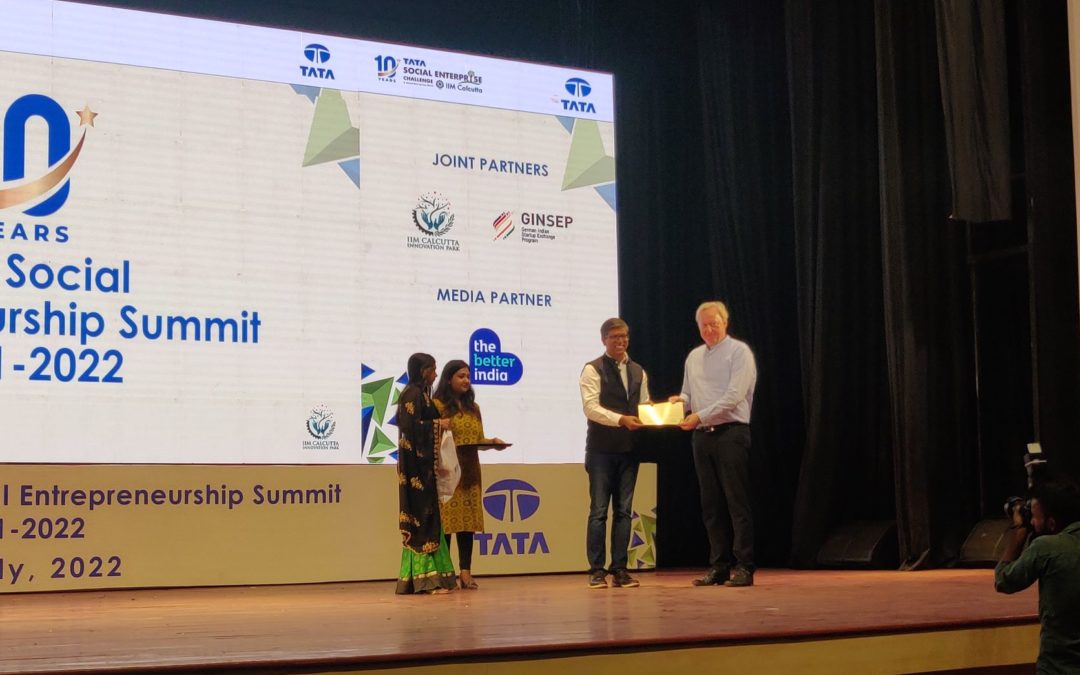 The 10th Edition of the TATA Social Enterprise Challenge pulled its curtains in style with the Social Entrepreneurship Summit held in the IIM Calcutta campus on July 2, 2022.

Apart from declaring the winners of TSEC 2021-22, the SE Summit also continued with the tradition of hosting the who’s who from the development space and deliberating over some key aspects concerning social entrepreneurship.

The 10th Edition of TATA Social Enterprise Challenge received a record breaking 6600 applications. 110 applications were shortlisted for the regional rounds. These applications covered areas such as agriculture, healthcare, water and sanitation, technology and development, education and skills development, housing, handicrafts, energy and microfinance, among others. Based on the business plan presentations, 22 social enterprises were selected for the semi-finals and eventually 12 enterprises made it to the finals.

GINSEP as a key ecosystem partner to the TSEC also saw two German Startups participating in the TSEC, that have been selected from a large number of applications from Germany. Both Startups got their trips to attend the grand finale sponsored by TATA. The two Startups 4Pilots and ODE Systems and the founders Gordian Overschmidt and Hannes Glaser got the opportunity to pitch their Startups in front of marquee impact investors of the Indian Startup Ecosystem. They also got an opportunity to get valuable feedback and get their businesses validated by core ecosystem players. During the summit the two staretups networked with enablers that can help them make their way in the Indian market.

Gordian Overschmidt, Founder of ODE Systems says about the TSEC:

“Decisions set the future in motion. 10 years ago, the IIM launched the Tata Social Entrepreneurship Challenge together with the Tata Group. ODE became aware of it through its partner in Germany, GINSEP, and participated in the competition thanks to the support of Flo Oberhofer. As a semi-finalist, we were invited to the Summit 2022 in Kolkata and set off on our first Indian Exploration Trip. Thanks to the open and warm welcome, our landing point Kolkata was like a soft landing for ODE and the team. On the IIIMC campus, we were able to interact with faculty and social entrepreneurs, learn about their impact and cheer on the award ceremony.”

The following weeks, with side trips to Delhi and Mumbai, were filled with meetings, discussions and workshops on the subcontinent for the startup. All senses were constantly addressed: From culinary delights for the eye and palate to exciting discussions on skill development and education as a general topic. During their tripü to India they interacted with educational initiatives, private educational institutions whether school or university, school administrators, educators, school psychologists, parents, researchers, deans and presidents of universities and the ITC as interested and open discussion partners.

Gordian says: “The actors of the Indian education system are ready to learn and open to the demands of the 21st century. We will be back very soon to initiate the pilots discussed and to launch ODE.india.”

GINSEP congratulates both Startups who made it into the seminfinals (ODE Systems) and finals (4Pilots) of the competition respectively. We are enthusiastic about having two more social enterprises who will make their way in India.