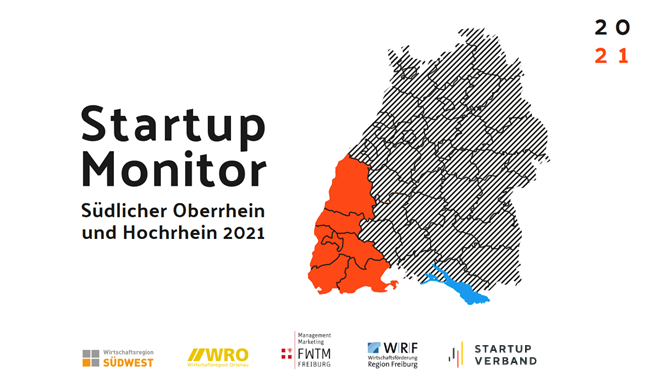 The Southern Upper Rhine and High Rhine region is located in the immediate vicinity of France and Switzerland and is part of the Upper Rhine Trinational Metropolitan Region. The region is located in Baden-Württemberg, one of Germany’s 16 federal states. The international flair shapes the region’s economy and culture. The region consists of the city of Freiburg and the districts of Breisgau-Hochschwarzwald, Emmendin-Lörrach, Ortenaukreis and Waldshut.

From 2019 to mid-2021, 754 startups were counted in Baden-Württemberg – which ranks 5th among the German states in terms of population. The Southern Upper Rhine and High Rhine are important regions in Baden-Württemberg in the southwest of Germany. In order to understand the potential of the region, a study was conducted by the German Startups Association at the end of 2021. For this purpose, the sample size of the Startup Monitor was evaluated. Of the 2,000 startups nationwide participating in the German Startup Monitor, 72 come from the Southern Upper Rhine and High Rhine region.

The Souther Upper Rhine and High Rhine region has become an attractive start-up destination in the past years. While the number of new startups increased by 13% nationwide from 2019 to 2020, despite the Corona crisis, Baden-Württemberg saw an increase of +19% and the southern Upper Rhine and High Rhine a stunning increase of +40%. There is no sole hotspot for startups in the region, but the Rhine-Neckar and Stuttgart metropolitan areas are very popular and desired.

The region is characterized by particular strength in the fields of environmental technology, food, industry and medicine. At 37%, a significantly high proportion of startups are in the green economy (nationwide: 24%). In the city of Freiburg, most start-ups (one in five) come from the field of medicine. In the Waldshut and Lörrach districts, the field of nutrition plays a major role in start-ups. In Ortenaukreis, on the other hand, more than a quarter of the start-ups are in the field of nutrition and industry.

More than every second startup (53%) rate the local ecosystem as positive. While the cultural attractiveness and appeal for talent stand out positively compared to comparable regions, there is a lack of affordable office space – which is highly problematic for startups, especially in the early stages. In addition, one-third of startups would like strategic investors, but only 10% have been able to land seed funding so far. However, with a high sustainability orientation, the region is well positioned in terms of the growing importance of ESG criteria for VC funds. Additionally, startups appreciate the international flair and openess the region offers.

If you want to learn more about the Southern Upper Rhine and High Rhine region, you can read here (in German).