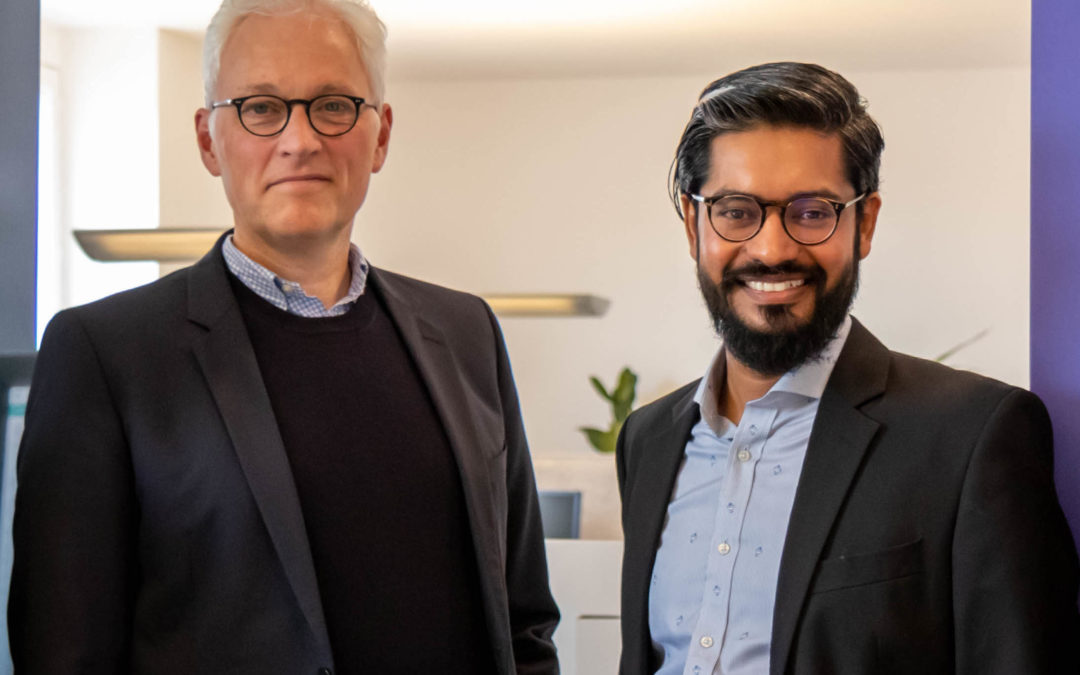 Moving to another country brings along many new processes to follow. Opening a bank account, finding the right health insurance and registering with the foreign authorities are only a few steps one has to undertake when arriving in a new country. When Samy Thiyagarajan came to Hamburg in 2004 for his Master studies at the TU Hamburg, he faced the same challenges. Navigating himself through the German bureaucratic landscape, Samy graduated from a master course with focus on Information Security in 2006. After finishing his studies, he realised that he did not want to work in the technical domain and was keen on exploring jobs in consultancy and management. “I initially wanted to work in companies like Boston Consulting and McKinsey but I aimed too high without sufficient fluency in German. Eventually I started working in an outsourcing project on digitalisation with India funded by Mircosoft,” Samy says. Samy moves up the ladder fast and soon runs the biggest digitalisation project for the British library, digitalising 2 Million pages a month. Working in a small German company, Samy is forced to learn the language to integrate in the German working environment. After four years, with the project becoming smaller and more regional, Samy decided to explore new challenges and changed the sector. In the coming eight years he worked in different roles for Vattenfall in the area of energy trading. Endless management meetings later, Samy was looking for a new opportunity. “I do not have any family business background and started exploring different ideas of founding my own startup,” Samy highlights. An idea of opening an import and export business for textiles did not materialise. Another six months Samy tried to connect poor artisans in India that produce high value scarfs with the export market. Samy says “As this is a capital-intensive business and I was not ready to invest this amount, the idea did not fly”.

At one point, Samy realised that he had to identify a problem and develop a technology to fix it. By being in contact with Indian students he remembered his initial challenges while settling in Germany: Opening a bank account and finding the right health insurance. “Many students I spoke to just signed up for any health insurance without understanding the details. I wanted to bring more transparency into the whole system,” Samy points out. Samy got in touch with his current business partner who is an expert in the insurance/finance domain. Both founded Coracle in 2016. Coracle is offering fully digital, seamless blocked account and health insurance services for international students coming to Germany. Samy says “We later realised that we were the first to offer fully digital public health insurance registration as everything was paper-based earlier.” As the service was well received by students, Coracle grew fast. From earlier focusing regional, they soon went global and got approved by the Federal Foreign Office, listing Coracle as a recognised Blocked Account provider. “We soon had customers in 140 countries and a quite international team – before Corona started,” Samy says.

In March 2020, the Corona crisis started, putting international travels and studies on hold. Samy says “Covid impacted our business significantly. Similar to Lufthansa, our business was affected considerably.” However, Coracle’s business model has been well prepared to handle crisis situations. “I am coming from a lean business process side and have digitalised many of our processes from start. Thus, we could downscale without compromising on the services. Additionally, our business has always been seasonal, so we are familiar with quieter months” he highlights. Although scepticism remains, students started slowly coming in again since the end of 2020. Samy says “Once the vaccination plan is rolled out, we are optimistic that students will start coming again.” Samy and his co-founder did not leave the time unused in the last year. “We used the time to fix and prepare things we had pushed aside in the last years due to daily distractions and identified new potentials,” Samy highlights.

Samy’s success in Germany is deeply rooted in his fast integration into the German society. Besides learning German, he joined a local Shooting Club (Schützenverein), something inherently German, to make connections and integrate in the German community. Samy says “Without this exposure, I am not sure I would have been able to start a business in Germany.” Speaking about “bureaucracy”, the most common pointed out challenge, Samy says “The bureaucracy is not as bad as it is projected, and processes are straight forward. However, if you do not know the language, navigating the bureaucracy can be a challenge.” Asked what makes Germany so interesting he says that while Germany is conservative, especially when it comes to banking and financial services, Germans are curious and open to new things. “Look at the many different restaurants in Germany, if Germans were not open for new things, you would not find this many diverse cuisines in the country,” Samy points out.

Samy is also an advocate for more cooperation between Germany and India. “Germany is advanced in manufacturing and India has the right skills to support digitalisation in German industries. Additionally, Germany is a mature market that is ready to pay the premium for new innovative solutions unlike the Indian market. Thus, I see a lot of potential for Indian entrepreneurs in Germany to test new solutions,” he says. Unfortunately, Samy observes that many Indian students are not ready to found their own company in Germany. “Starting a business is not in the mindset of Indians in Germany. 80%-90% of them are looking for a job. We should work on encouraging more Indian graduates to take the entrepreneurial leap,” he concludes.