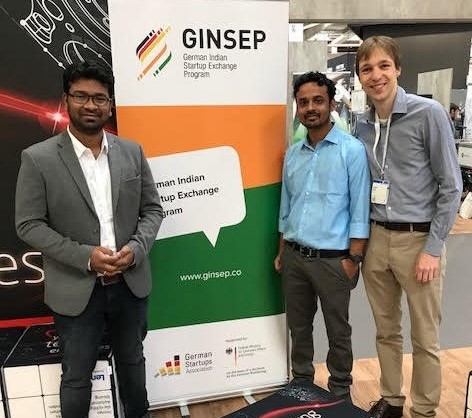 During these days of remote working and changing from analogue to digital, most of us – may it be on a company-level or individually – might struggle with technology. Digitalisation has evolved rapidly in the last two months with meetings being conducted via Zoom, Skype or Microsoft Teams. But technical glitches are common as seen in the recent video conference between the WHO and Angela Merkel. Also, on a household level, we often struggle to navigate technical advancements.

Having realised this as an opportunity is the Indo-German startup BlinkIn. Founded by Harshwardhan (Harsh) Kumar, Nitin Kumar and Dhiraj Choudhary in India together with Germany-based Josef Süß, BlinkIn has created a visual remote tech solution powered by AI & AR to remotely monitor and navigate technologies. “BlinkIn is a solution for being there, without going there,” says Josef Süß. “For this purpose, we offer two tech solutions – Scotty and Houston – which are now operating in 43 countries in 19 languages,” he further highlights.

Named after the Star Trek figure “Scotty”, BlinkIn’s AR solution ‘beams’ tech support to wherever it is needed and allows easy remote man-to-man support via smartphone, while “Houston” is an AI self-service system powered by a virtual agent, which was named after the famous sentence: “Houston, we have a problem”. This way, BlinkIn enables quick and efficient support without any (national) boundaries and avoids communication in the dark. BlinkIn’s remote technology allows seamless transportation of human expertise and experience anywhere in the world.

Unsurprisingly, the importance of AI & AR powered solutions has risen in times of COVID-19. One of BlinkIn’s success stories is their recent involvement in the Wuhan outbreak. Huber & Ranner, a Germany-based manufacturer of air handling systems, has been one of BlinkIn’s earliest clients. It uses BlinkIn’s solutions to power its customer support service, which played an elemental role in the setup and maintenance of ventilation units shipped to Wuhan’s hospital. “Given travel restrictions, our remote-controlled technology was used to enable a group of qualified German engineers to enter the hospital in Wuhan virtually and to help the staff on site to install the machines,” says Joseph Süß. “We do not replace people with our solution, but help and assist them in solving problems,” Josef emphasises further.

Asked about himself and tips for startups during the Corona crisis, Joseph highlights that he is “less a classical manager but an entrepreneur by heart, which has enabled him to see the bigger picture”. “Within BlinkIn we have been focusing on the problem and the solution rather than solely on revenue. Therefore, I believe that good and flexible startups will overcome the Corona crisis. This will also give digitalisation a tailwind as people are realising that remote actually works,” he emphasises. 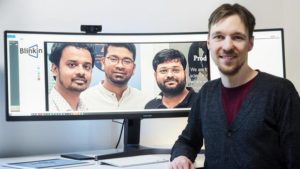 To enforce their growth and internationalise without neglecting their successful day-to-day business or the trustful relationship with their existing customer base, the Indo-German startup is currently looking for investments. “Our mantra so far has been ‘Go on your own as far as you can and only bring in investors when you feel the pain that you are missing out on opportunities’. But given the increasing need for our solutions, we have decided to acquire external funding,” Joseph Süß says.

GINSEP has played an important role in BlinkIn’s journey in the last two years. “We have benefitted from the network and the events offered by GINSEP from the moment we started to set-up our business over 2 years ago,” Joseph Süß highlights. In 2018, BlinkIn was part of the GINSEP pitches during the Hannover Messe, the world’s leading fair for industrial players. Since then both the startup and GINSEP have benefitted from each other. In regular events Joseph Süß continues to share his knowledge. “We are an Indo-German start-up through and through and can offer a lot of advisory to startups operating in the Indo-German startup ecosystem,” he concludes.