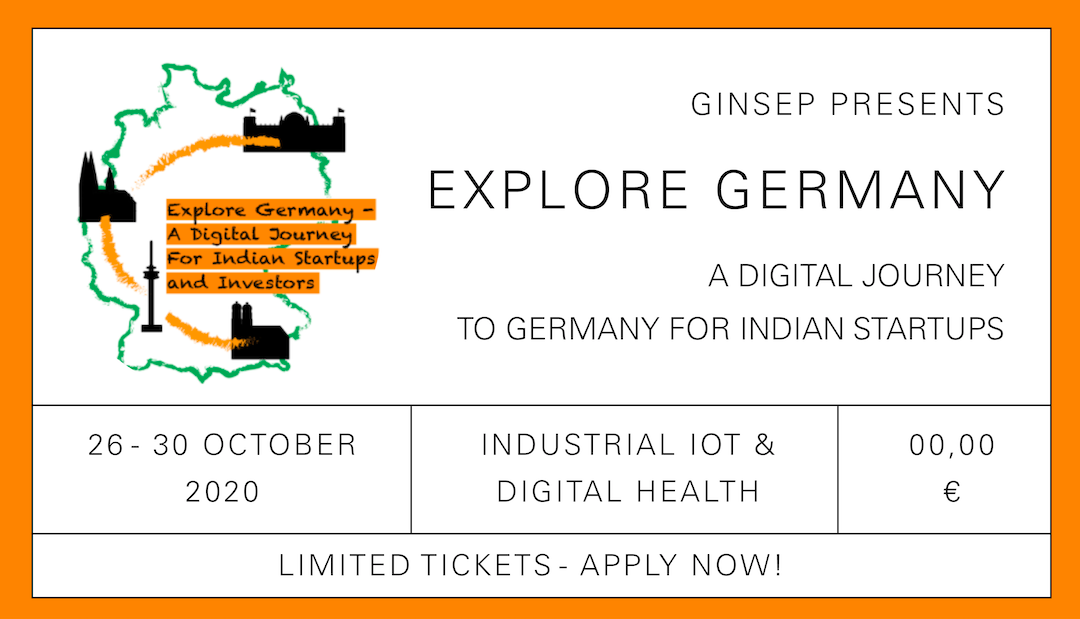 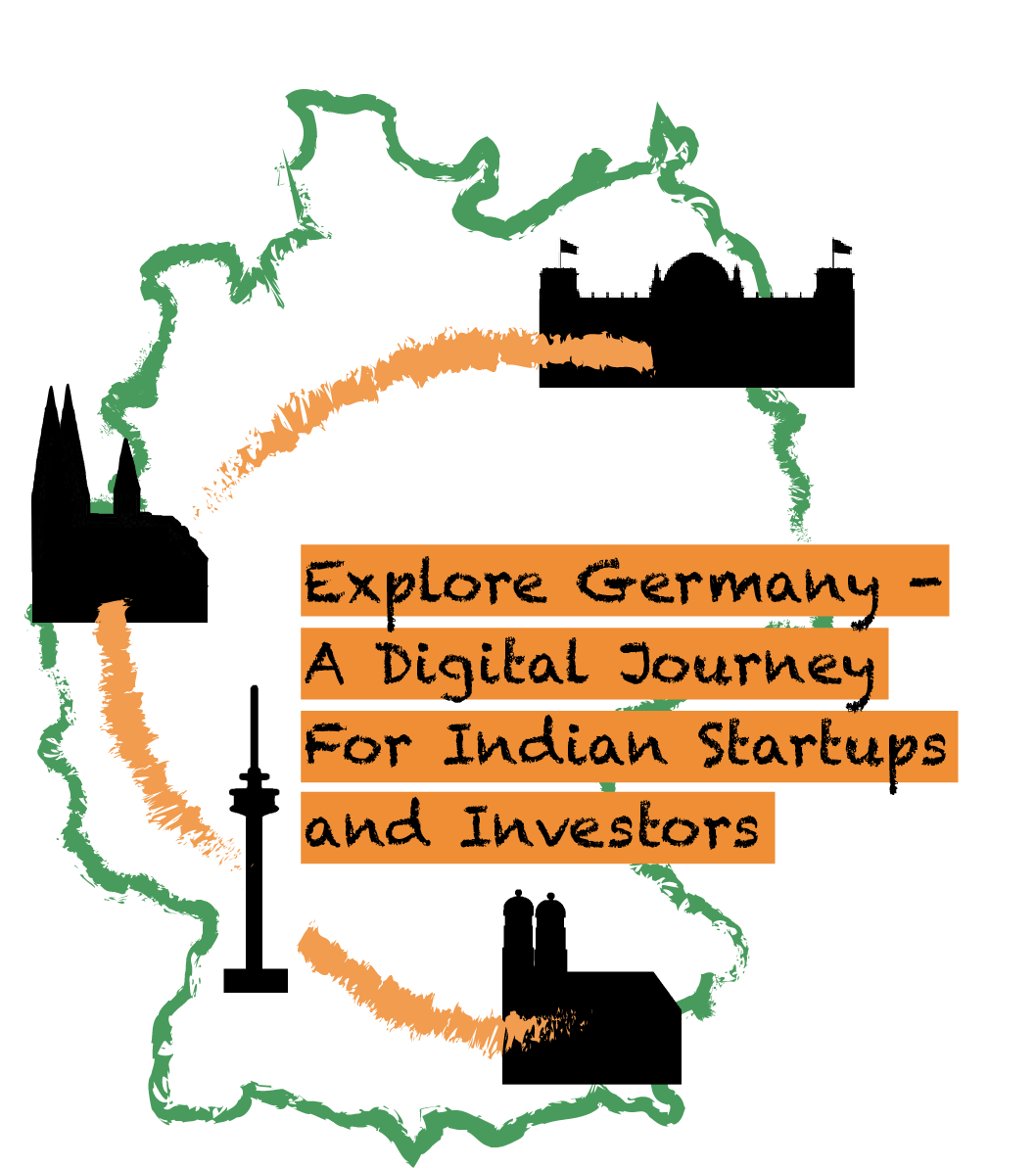 You’re interested in seeing our amazing startups pitching?
Become our guest with these tickets and see these events!

We’re happy to see you at the event!

Watch out: If you’re part of a city partner, a startup or investor use our
Delegate Ticket for full access that we’ve sent to you!

Let’s go on a digital journey to Germany! Together with 4 regional partners we’re giving 14 selected startups from India operating in the digital health or industrial digitization space the chance to go on a digital trip to Germany from October, 26th-30th! During the trip you’re going to have the chance to meet investors, regional partners and other startups, participate in workshops
and get insights into different German startup regions. Read the eligibility criteria below and fill out the form, if you’re an Indian Startup and you’d like to participate! 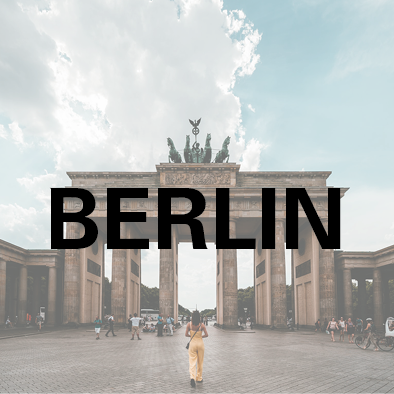 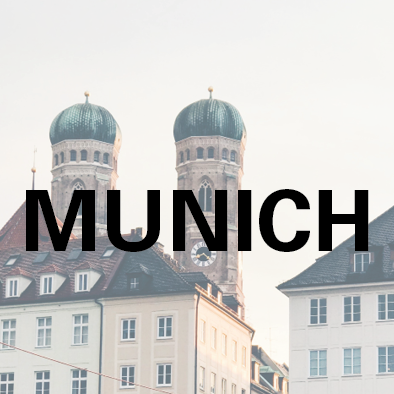 We’re going to start in the capital! It’s the biggest startup region in Germany and has the highest startup funding in the country (3.541 Mio. € in 2019) which ranks second place behind London in the European Ranking. Berlin is the German Fintech hotspot. 34.8% of all Fintech startups in Germany are based out of Berlin. The most common business model of local entrepreneurs is SaaS. Asia is a relevant market for many Berlin-based entrepreneurs: 36.6% of Berlin Startups are planning to internationalize to Asia. Apart from these hard facts: Berlin is a great Startup city. It offers an amazing entrepreneurial network, a rich history, three big universities and a rich culture.

Let’s go South! According to “Munich Startup” currently over 1,300 Startups are operating in Munich. With health startups like “Ottonova” or “Kaia Health”, the city of the Oktoberfest is well represented in the health startup sector but also AI, Mobility and Real Estate Startups are relevant startup sectors. With local Founders Festival “Bits & Pretzels”, the city is also a place for the global startup scene. Founders of huge unicorns like Virgin, Airbnb, Shazam, Tinder, and Evernote have taken part in the summit. So it might not be the worst idea to have Munich on your Startup Bucket List!

Karlsruhe and the whole Baden-Wuerttemberg region are mostly famous for big companies like Mercedes-Benz, Porsche, Bosch and Trumpf. But apart from these big global players small startups have evolved in the last years that profit from the innovation and engineering culture in the region. One of the biggest examples is probably the drone cab Volocopter. The Bruchsal-based company collected €1.3 Million Seed Funding from private Investors in only 3 days – a European record! (The company also reached out to Asia when it flew over Singapore’s Marina Bay in 2019.) But apart from this example Karlsruhe has much more to offer! First of all a big startup community, networking opportunities and the KIT – one of Germany’s premier institutes for technology and excellence. Start-ups can also benefit from strong competence networks in the field of SmarterCity development such as Digitization and Smart Production, Energy and Mobility. Finally, the City of Karlsruhe is a pioneer in Indo-German business exchange with its own Innovation and Cooperation Office in Pune that opened doors back in 2014.

The North-Rhine Westphalia area is the biggest conurbation and industrial region in Europe with an enormous potential for the B2B segment. It comes as no surprise that the region is home to a large set of creative founders! Both cities – Cologne and Düsseldorf – offer excellent networking opportunities for young entrepreneurs. The biggest sectors present in the NRW region are the IT, insurance and healthcare sector and founders are often coming straight from one of the many universities in the area. One of the newest hotspots for heathcare startups in the region is the Digital Health Germany Assocation that brings together stakeholders from industry, academia and the private sector. Düsseldorf/Cologne is the region where innovative start-ups can meet established corporations and where providers meet users. Companies locating here become part of a strong network of digital companies and traditional corporations. One of the leading startup events to meet industry and connect with the ecosystem is the “Digital Demo Day”, a Startup Expo & Conferece for Industrial Tech in Düsseldorf. Over 20% of the all startups from NRW are planning to expand to Asia.

What is the theme?

What are the key value propositions for the applicants?

What are the qualification criteria?

While each of you is unique and will be different, we are on the lookout for startups with

What are the key dates?

What is expected of applicants if they are selected?

If you are selected to participate in the delegation trip, we expect that you will

The trip is going to include…