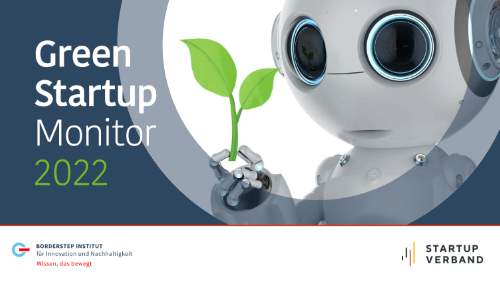 Green startups have become a central part of the German startup ecosystem, with almost one in three German startups being green, according to the findings of the Green Startup Monitor. In particular, so-called transformational green startups – startups that combine their sustainable focus with an orientation toward rapid growth in order to change value chains and markets – are becoming increasingly important in the green startup ecosystem. In doing so, they meet the challenge of a sustainable transformation of the German economy with radically new entrepreneurial approaches to solutions, whereby they are more innovative and technology-oriented than conventional startups. German universities are an important starting point for green innovations. Almost a third of all green startups are research-related startups.

Sustainability has become a core mandate for many startups in the German startup ecosystem. It is thus not surprising that the promotion of innovations to combat climate change forms the most important demand of German startups to policy makers. It is also clear that green startups are particularly active in climate-relevant sectors: More than two-thirds of all startups in the energy and food sectors can be classified as green. And while green startups are spread across almost all sectors of the German economy, other climate-relevant sectors such as the construction and real estate industries, with a 25% share of green startups, or the tourism industry, with 18% of green startups among all startups, urgently need to catch up.

In addition, green startups are also doing pioneering work in terms of diversity. At 21%, the proportion of female founders is significantly higher than in the startup ecosystem as a whole. The same applies to financial service providers. Startups in the banking, finance and insurance sectors are not providing sufficient impetus for the realization of the Sustainable Finance Strategy of the EU and the German government.

The dense network of outstanding university research in Germany is the origin of numerous innovative green companies. Almost one third of all green start-ups are research-related start-ups. Green founders often get to know each other at university (40%). Among green startups, the share of founders with an engineering degree is significantly higher (29%) than among non-green startups (20%). While three out of four founders have taken advantage of consulting services and financial support such as EXIST funding, there is still considerable need to expand this support on the one hand and to introduce curricula that integrate sustainability as a cross-cutting topic in the learning process on the other.

The biggest challenges facing green startups relate to sales and customer acquisition (63%), followed by product development (44%), access to capital (37%), and cash flow/liquidity issues. So far, raising capital has been significantly more challenging for green startups than for their non-green peer group. This is no longer the case in 2021. In a year-on-year comparison, staff recruitment becomes more important for both groups – but green startups still experience fewer challenges here. As in previous years, green startups make greater use of government funding (48%) than their non-green startup counterparts (42%).

In addition to promoting innovation to combat climate change (62%), the three most important demands green startups make of policy makers include simplifying and targeting the awarding of public contracts to startups (38%), streamlining administrative services (35%) and simplifying employee participation (30%).

In light of rapid climate change and other major sustainability challenges, there is now a broad political consensus that a fundamental shift toward a climate-neutral economy and consumption is necessary. As the GSM points out, it is important for more than three quarters of startups in Germany to have a positive social or environmental impact. This makes German startups promoters of a sustainable transformation of the economy.

If you want to learn more about the green startup ecosystem, you can find the full GSM here: https://startupverband.de/fileadmin/startupverband/mediaarchiv/research/green_startup_monitor/gsm_2022.pdf