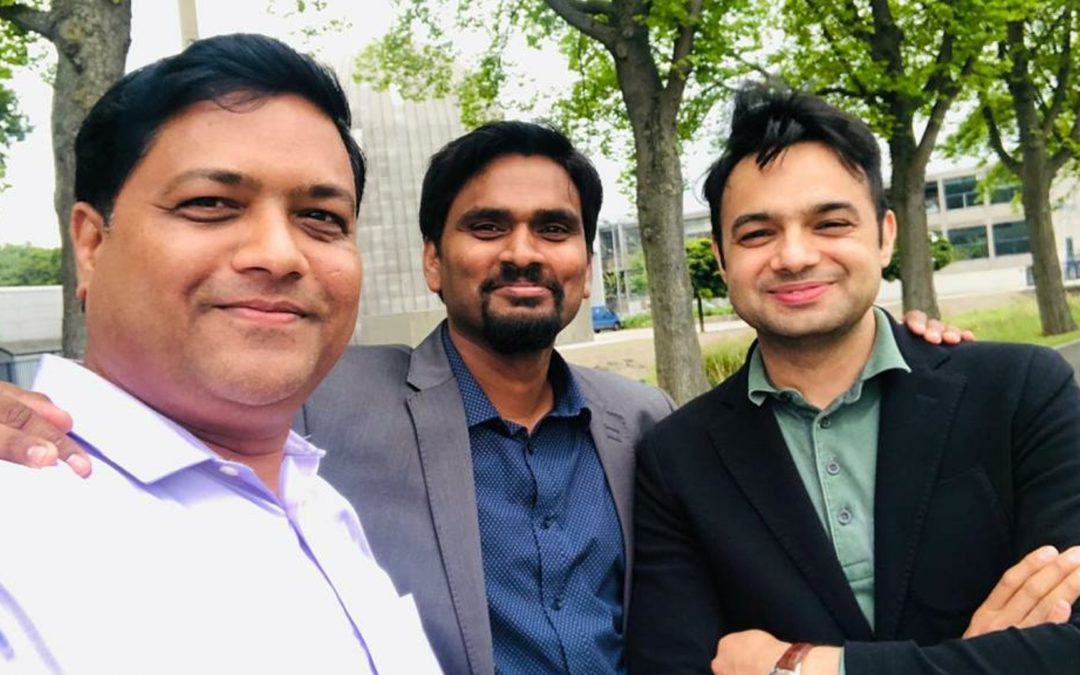 Scientific spin-offs are the ideal scenario of a startup foundation but the transfer from science to business is not always easy. Scientists often lack the necessary knowledge to bring their innovations to market in an application-oriented manner.

Prateek Mahalwar has taken exactly this path. In 2009, Prateek came to Germany on a scholarship to do his master’s in neuroscience in Magdeburg. He then began his PhD at the Max Planch Institute in Tübingen under Prof. Christiane Nüsselein-Volhard, the first woman to receive a Nobel Prize in Medicine from Germany. As president of Max Planch PhDnet, he began to recognize the gap between science and the market. With an ambition to close that gap, he started to educate himself on entrepreneurship. In 2016, Prateek joined Ernst & Young as a strategy consultant to work with life science companies such as Bayer, BASF, etc.

As the topic of sustainability gained momentum, he realized the enormous impact microplastics have on the environment. Together with two friends, one of whom, Yogesh Sonvane, also worked at the Max Planck Institute in Magdeburg and one of whom, Srinivas Karuturi, was employed by Daimler, they developed a solution to this problem and filed a process patent.

Bioweg was founded in 2019. The startup’s mission is to decode personal care products. “All products contain solid microplastics and liquid polymers. They enter the food chain through fish and water,” Prateek says. To solve the microplastic problem, the startup has developed a solution that is bio-based and addresses the problem of stability in the formulation to replace both solid and liquid microplastics. The startup combines biotechnology, materials science and machine learning to develop highly functional and customizable bio-based materials and ingredients. “We use machine learning (molecular simulations) to customize the product to the customer’s needs,” Prateek further emphasizes. The company takes a circular economy approach, thus is very innovative. Current focus sectors include cosmetics, homecare and food.

To gain the knowledge of the personal care and ingredients market they initially lacked, they participated in various incubator programs, such as the 2019 DSM YES!Delft Incubator in the Netherlands, to validate their business model – and even ended up winning the program.

As they gained visibility in the ecosystem, investors approached them. Prateek says, “We were ready to raise money for a pilot project.” But despite the initial interest, he realized that raising money as three Indians wasn’t easy. “We tried to build trust with our potential investors by getting our first customers on board,” he continues to emphasize. The effort eventually paid off and the company found two investors who put more than half a million euros into the startup.

At that time, Prateek was living in Frankfurt am Main and the question arose as to where the plant should be built. After several months of searching for the right location, they found Quackenbrück, a small town near Osnabrück that is well-known in the food industry. At the same time, the town is home to the largest institute for food technology in Germany – the German Institute of Food Technology, which is known for its research and development. “We immediately felt welcome in the city and were even greeted by the mayor,” Prateek says. Since then, all the founders have moved to the city. “In the beginning, we had to deal with a lot of visa problems when we wanted to bring my colleague to Germany in the middle of the pandemic, but there is a local business development agency near Osnabrück that helped us a lot with the visa problems,” Prateek adds.

The company has since built its pilot plant and a research lab. “We got a lot of support from Max Planck, since I’m an alumni,” Prateek says. Currently, the company has 10 employees and is growing.

The company is successfully overcoming the challenges it faces. “Germany is a complex market with many rules, especially in cosmetics and food. We would have liked more support in setting up a business,” Prateek says. One of the biggest problems they face relates to recruiting the right talent. “The German and Indian culture is very different and that sometimes creates challenges for us,” he adds.

Prateek has been active in the Indo-German startup space for some time and has participated in several GINSEP events. “I was part of the Indo-German Young Leaders Forum and met Angela De Giacomo, the initiator of GINSEP, there. She introduced me to the GINSEP activities, and I have been following them for a while now,” he concludes.