Alpha Telemed: Our journey with GINSEP 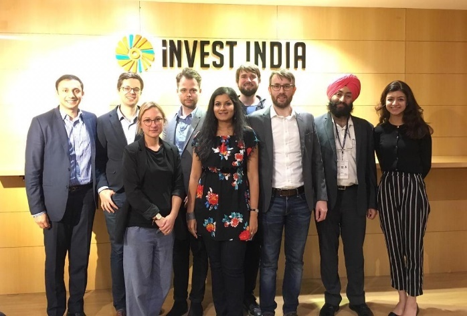 In autumn 2017, Alpha-Telemed, which enables home-monitoring of Parkinson’s patients, using a proprietary software, for the purpose of medication-adjustment, embarked unwittingly on an exciting & unpredictable journey with GINSEP – a journey that has lasted for well over 2 years and traversed 6 cities: Munich, Bangalore, New Delhi, Kolkata, Hannover & Berlin.

It all started with the German Indian Business Forum held in Münich, Germany, in Oct 2018. AlphaTelemed chose to apply for this event and submitted the documents via the GINSEP website. Shortly after, we were selected to pitch on stage, as one of five finalists. Not only did this forum bring us in contact with a variety of investors, strategic partners, industry experts & scientists, it heralded the start of a journey into India for the hitherto-Germany-focused Alpha-Telemed.

The next event on the Alpha-Telemed plate was the Indo-German Startup Tour organized by GINSEP, which selected 4 companies from across the 4 corners of Germany to visit Bangalore & New Delhi to participate in conferences, startup-insight seminars, one-on-one meetings with industry bigwigs, sessions with incubators, talks with government bodies, round-tables with multi-nationals and a demoday over a period of 10 days. The impressive line-up included Invest in India (Delhi), Excubator (Bangalore) and a HealthTech summit (where Alpha-Telemed was privileged to participate in a panel discussion in front of an audience of over 350 people). The tour was rounded off with personal meetings with leading figures from Bosch, SAP and Daimler in the form of meetings as well as a Design Thinking workshop. Armed with first-hand experience of the Indian system & infrastructure, as well as close interaction with both governmental agencies as well as key personalities from the private sector, all of us startups were far better poised to enter the Indian market, than we had been at the outset of this trip.

Our journey with GINSEP also flowed seamlessly into the year 2019. It commenced with Alpha-Telemed being selected as 1 of only 2 German companies to participate in the TATA Social Enterprise Challenge held at the renowned IIM-Calcutta in January. This highly competitive event saw over 900 applications being submitted for consideration and only 20 startups making it to the semi-finals, of which AlphaTelemed was one. The live-pitch, which was also recorded on video & well-received by judges & bystanders alike, was accompanied on the previous evening by business-analysis sessions & informative lectures by institute officials.

April-2019 brought this partnership back to Germany, in particular to the Hannover Messe, where Alpha-Telemed was able to engage in conversation with various cutting-edge digital health companies from across the world, thanks to the pro-active support & subsidized entry from GINSEP.

The EuroSTEMpeers conference at the end of this month was witness to a further strengthening of the Alpha-Telemed-GINSEP bond, as was an invite-only company presentation in front of a high-level Indian corporate & government delegation (from the Confederation of Indian Industries) by AlphaTelemed, as part of a Startup Session conceived of by GINSEP. 2019 culminated in further close interaction of Alpha-Telemed & GINSEP at the Xpomet Medicinale, a large-scale healthcare festival which took place in Berlin and saw both parties present their achievements amongst a 1000-personstrong attendee list.

Over the past year, Alpha-Telemed has made signficant steps towards capturing the Indian market as the Alpha-Telemed application has potential in both markets India and Germany. We, at Alpha-Telemed, look forward to continuing our fruitful, adventurous, transcontinental & mutually symbiotic partnership with GINSEP well into 2020!