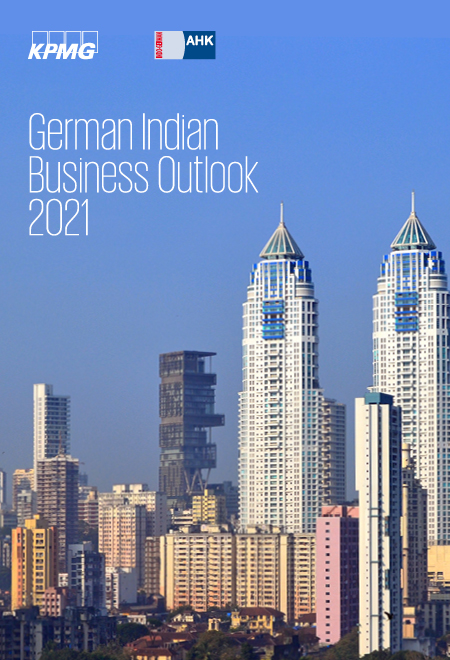 KPMG jointly with the Indo-German Chamber of Commerce recently launched the German Indian Businesss Outlook 2021. The report summarises the results of the survey and provides insights into the business expectations of German companies in India and the potential of the country.

The decline in demand due to COVID19 is lower than expected:

German companies in India expect 2021 to be a profitable year – this holds true despite the strong impact of the second COVID19 wave in India during the months of April and May. Two out of three responding companies (66%) expect increasing turnover, every sixth company even expects growth of over 20%. Additionally, half of the companies (49%) also expect higher profits than in the previous year.

In the medium-term companies are even more optimistic: for the coming five years 89% of respondents predict increasing turnover and 71% expect an increase in profits.

The survey was conducted between 25th of February and 19th of April 2021, focusing on the business outlook of German companies in India.

COVID-19 Pandemic leads to a widespread decline in demand

Despite the fact that since the start of the COVID19 pandemic many German companies in India have reduced their vulnerability to crisis, more than half of the companies (55%) have reported a decline in demand. The financial situation of many companies is equally cause for concern: 26% of companies are struggling with liquidity shortages and 22% report bad debt losses. However, 1 out of 6 surveyed companies have reported an increase in demand.

Despite many existing challenges, India will have the biggest middle class worldwide by 2025 and offers vast opportunities for German companies. The majority of surveyed companies count on growing domestic demand (84%) and high sales potential (81%) due to demographic change and rising income levels. Two thirds of companies (65%) name the availability of a skilled workforce, due to the large number of university graduates, as an advantage.

„Even though the magnitude of the second COVID19 wave and the resulting human suffering are clearly shocking and despite the fact that the trade volume with India is currently only at 10% of the trade volume with China: India is an increasingly important market for German companies. Currently India’s market potential is only marginally explored which, to some extent, explains the optimistic outlook of German companies in India” emphasizes Andreas Glunz, Managing Partner International Business at KPMG in Germany. “Regardless of the currently difficult and volatile economic environment, three out of four responding companies (76%) plan to increase their employment figures until 2025, 18% even plan for an increase of more than one fifth.”

Progress regarding key location factors and positive expectations for the future

81% of survey participants have observed progress regarding the development of India’s infrastructure, one of the key aspects of India’s overall development. Last year the Indian government has announced infrastructure investments worth 1.3 trillion Euros, allocated to the modernization of the transportation network, energy and water supply networks as well as the telecommunications infrastructure.

Three out of four survey participants (74%) also expect significant positive effects due to the increasing digitization of the industry, “The digitization in India and Germany has experienced an unprecedented push during the COVID19 pandemic. On an almost daily basis we are receiving inquiries from German IT companies who are interested in establishing a subsidiary in India or are looking for collaboration partners in the Indian market.” explains Stefan Halusa, Director General of IGCC. “Especially the German SME sector should look into strengthening their presence in the Indian market.”

67% of companies consider progress to have been made on the further development of Indian democracy and the political environment. Only one out of ten respondents see regression in this topic.

Nonetheless, German companies in India still face a number of significant operational challenges. 59% state that Indian bureaucracy and administrative obstacles are negatively affecting their business, a problem which is particularly prevalent outside of major business hubs. 43% mention currency risks as a major challenge and almost as many (38%) cite corruption as one of the major challenges which their company is facing.

The complexity of the Indian tax system, legal uncertainties as well as a difficult regulatory framework – often in combination with insufficient or protracted law enforcement – are each perceived as a major operational challenge by about a third of the companies respectively.

Almost as many (30%) are regularly challenged by payment delays and debt defaults and about a fifth of the companies describe protectionism – the preferential treatment of local companies -, skills shortages and rising personnel costs as “difficult”.

„In spite of clearly recognizable improvements in the business environment for German investors in India, one should not fail to recognize a number of persisting impediments which still need to be improved, such as governance, legal framework and reduction of bureaucracy, until India reaches China’s attractiveness for German businesses” says Andreas Glunz (KPMG).

The topic of sustainability is gaining prominence; however, no spotlight yet on the reduction of CO2 emissions

German companies in India have been increasingly implementing sustainability projects or are planning to do so within the next two years. 75% of survey respondents reported projects designed to save energy and water. The same does not yet apply to the reduction of CO2 emissions: only a third of the companies (32%) has implemented projects to reduce CO2 emissions and only a fifth of the companies (20%) are planning such projects in the coming two years.